This study by the digitized-wristband maker Jawbone found that Singapore is the third most sleep-deprived city in the world, after Tokyo and Seoul. Singaporeans sleep on average only 6 hours 32 minutes. By comparison, residents of Melbourne, the most well-rested city in the study, sleep 6 hours 58 minutes.

The harmful effects of long-term sleep deprivation are well documented. In my 11 years of experience as a tutor, I have also encountered many young Singaporeans who abused their bodies by sleeping only 3-4 hours a day on average. In one case, I told the young lady that she might experience serious health problems in the future. That was when she hit me with a bombshell. “Mr Ooi,” she said, “I have diabetes.” She was only 18.

I am no doctor, but you don’t need to be a medical expert to guess that a lack of sleep – the human body’s beautiful and vital repair and maintenance mechanism – could be linked to a whole host of serious disorders, including diabetes. I guessed that her diabetes could have been the result of prolonged sleep deprivation, and just a year or so later my hunch was backed up by this scientific evidence.

I strongly recommend that you read this article as well. 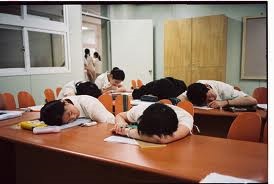 Many studies by credible sources have concluded that adults need 6 to 8 hours of sleep a day to remain healthy.

Adolescents and children, of course, need more. The National Sleep Foundation in the US has assessed that teenagers need eight and a half hours a night.

So if you are sleeping only four or five hours a night as a teenager, think of what kind of long-term destruction you are doing to your body.

I am writing this because I don’t want you to get the shock of your life from your doctor ten years, or even ten months later.

By the way, I have two other hunches.

Firstly, have you noticed that there seem to be more cases of young people collapsing and dying during physical exercise in recent years? I suspect that it may have something to do with the declining amounts of sleep they are getting – their escalating abuse of their own bodies.

Secondly, at a young age, your body is still developing – and that includes your reproductive system. Do you think it’s possible that a persistent lack of sleep could render you infertile one day? One of my junior college friends recounted to me that she didn’t take very good care of herself when she was younger, and she went through a massive struggle to have a child. Thank goodness she succeeded, but I’m sure many others aren’t so lucky.

Again, I’m no doctor. But don’t you think it’s possible that a lack of rest now could affect your fertility one day? And if it’s possible, do you want to take that risk? I know having a baby is the furthest thing from your mind right now, but believe me – one day you will probably yearn for one.

So put aside your books (and your Facebook), and get to bed an hour earlier tonight. I know you have an unbelievable amount of homework to do, tests to study for, CCA events to train for. But a human being can only do so much in one day before her productivity starts to decline, and one gets not only diminishing but negative returns: the next day you are unable to absorb the content of your lessons, or analyse it well.

I wish you a good night’s sleep.

A dedicated English and GP tutor with First Class Honours from the National University of Singapore, Steven Ooi retired from the profession after a 14-year career during which he was one of the most sought-after private tutors in Singapore. He is the recipient of the Minerva Prize from NUS, which is awarded to the top English Language honours student of each cohort. This website, which has consistently ranked among the top 10 on Google and has received over 530,000 hits, has now been converted into a GP resource site cum listing of recommended tutors. If you are a GP or English tutor who wishes to be listed here, please email Steven Ooi at stevenooi18 @ yahoo.com (remove the spaces). Interested parties will be assessed and interviewed by him, and qualifications will be checked. These procedures are necessary to uphold quality standards. DISCLAIMER: While every reasonable effort has been made to assess the competence and verify the qualifications of recommended tutors here, no guarantees are made and you engage them at your own risk. By using this website, you agree that you will not hold the webmaster Steven Ooi responsible for any consequences — direct or otherwise — that occur in relation with your use of this website.
View all posts by gptuitionsg →
This entry was posted in Random thoughts of a GP tutor and tagged english tuition, english tuition singapore, general paper tuition, gp tuition, singapore gp tuition. Bookmark the permalink.